Had a great little outing today at the Peak 2 Peak multi sport race in Queenstown.

Warming up with George, Frankton Arm 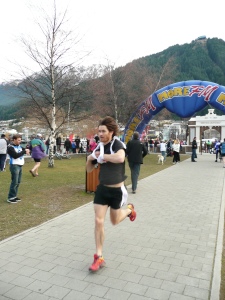 Start of the run at Queenstown beach, sorting out my tangled bib

Team Ferg Burger got off to a pretty good start, with Neil (who I never meet!) come 3rd off the ski and Marty quickly jumped into 1st place on the down hill mt bike down the Remarks road. Mike paddled hard to hold onto our slight lead over the highly fancied and defending champs the Outside Sports team. END_OF_DOCUMENT_TOKEN_TO_BE_REPLACED

Taking off south for Queenstown for the 3rd time in about 3 weeks. I wish I was a little more excited about this trip but it feels like a drain with all the driving.

I am going to hopefully be demoing some Dyanfit gear, but the main reason for the trip is to race in the Peak 2 Peak as part of a Ferg Burger sponsored team.  We will have  a pretty tough task up against the OutSide Sports “dream team”.  I am doing the run section which is 9km from Queenstown beach to the Coronet Hotel at the bottom of the Coronet ski road. Most of the run is on the road, which I hate, but it is mostly up hill which is a plus! I will be up against Adrian Bailey (Jane calls us the 2 fat gingas). I have only raced Adrian once at the ’09 Routeburn. I wouldn’t really say raced as I was so far back in that race, but a lot has happened running wise for me since May 2009, so I think if Mikey and the boys on the ski, mt bike and paddle can keep me in touch it should be a fun run. We then have some stud ex pro road biker to finish things off!

Should be fun, Jane and George are coming along and hopefully we will get some good skiing in along the way I’ll also hopefully be rocking some new kit courtesy of my new sponsor…..

Actually the little guy loves it!

Yesterday day afternoon Tim, George and I got a quick lap on the west slopes off the back of Cheeseman ski area, it was pretty good. The sun was out and we got some fun turns.

Thanks to Tim for the video and photo!

I’m in! The hardest part of the Kepler Challenge is now behind me after I successful entered my self and Jane at 0630 on Saturday. Sounds like some folks had a total nightmare, with the Kepler web site freaking out and frezzing with all the traffic.

Now for the fun part!

Welcome to the ghost town that is my poorly maintained blog………….

I have been really slack with this lately, mostly due to being super busy with work and skiing when and were possible. I have also been running a little here and there. there has been heaps happening- Dynafit and ARVA sales are going off and iclimb.co.nz is also super busy, so work wise things are going great. Its been well over 2 months since I made a coffee, mopped a floor, or cleaned a toilet for  wage. I am in no way above any of those things, but the little dream of being self employed is finally gathering some steam!

The skiing has been great for June. I won’t post any photos as I have been posting a heap over on the Dynafit NZ face book page- check it out and become a fan. Jane and I were down in Queenstown for the Dynafit co sponsored Skin to the Summit race this week. It was super fun, but had a disappointing turn out, but what do you expect for a race at 730am in a Tuesday?

Running has been ticking over. Big news on that front is that I will be running for Salomon this coming summer! It pretty exciting, as I am a huge fan of Salomon Running shoes, so it will be nice to get a few free pairs. I’ll post more details on this later, but thanks heaps to Salomon NZ and Holly!

Off to Wanaka tomorrow for the mountain film festival. Jane has some of her art on display there. I’ll hav ea bunch of Dynafit gear, so if by chance you read this and are in teh Wanaka area an dwant to demo soem gear get in touch.

We also have a dog- Gorge. We got him from the pound in Ashburton and he loves to run and seems to enjoy skiing also.